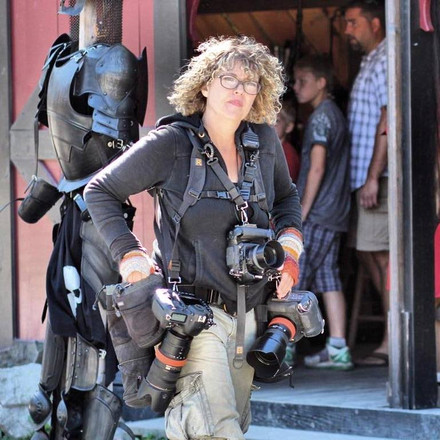 Award-winning photographer Deborah Grosmark was born and raised in Rockland County, New York. Focusing primarily on people, artists and acrobats, she uses natural, studio and theatrical lighting to capture moments that are genuine, in-motion and true to both their environment and the spirit of the lives she records.  To expand her on-location work, she has just acquired a new studio in the heart of the Garnerville Arts Historic District.

Primary disciplines include unit stills, documentary, editorial and commercial work.  She specializes in the Circus and Performing Arts, including: Period Drama; Science Fiction; Medieval Joust/Equine; Stage Combat; and Contemporary/Traditional Circus.  She holds a passion for large scale, project-based work, which creates a unique foundation for her strengths - the cinematic blending of marketing with artistic vision.

Deborah has worked in a variety of environments, such as: on and off-Broadway, on-location sets, sports arenas to intimate, one-ring circus tents. Her latest photographic journey has been documenting archival and marketing imagery under the direction of a multi-planetary architectural and technology design agency.

© Deborah Grosmark *The unauthorized use of any image is prohibited. All rights reserved.
User Agreement
Cancel
Continue